These Are A Few Of My Favorite Things – Episode 2

Back by popular demand (and also I’m kinda bored and burnt out), here’s episode 2! Before I continue, I realized in my last one that pretty much every one of my choices went something like “Well, this happened, then something else, but I can’t tell you because spoiler actually, but it’s pretty cool, trust me.” As a result, this time there will be LOTS of spoilers…so skip ahead or avoid entirely if you’ve never heard of these titles, but would be interested in playing them, or you’ve simply never gotten to said points in the game…you’ve been warned.

Chrono Trigger – Trial/Breaking Out Of Prison 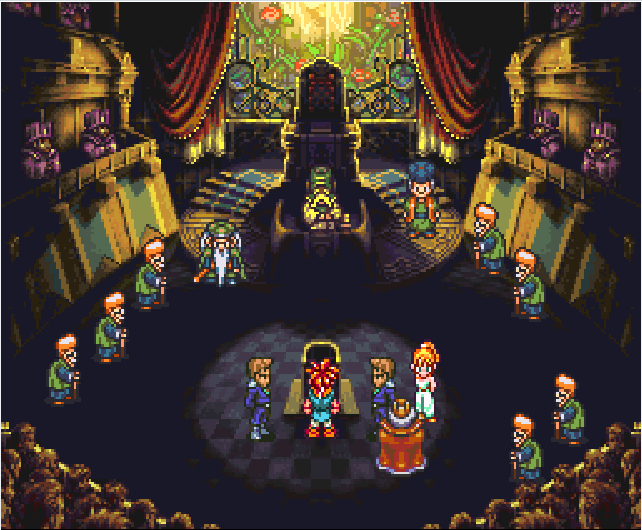 You know, typically when you make choices in games, there are these complicated and yet not so complicated twists and turns companies like Bioware, Bethesda, 2K Games, and Lionhead Studios like to imply at the very least. Usually they don’t actually CHANGE much, but they ACT like they do. It’s like choosing to light a firecracker and throw it or set it down and run away…you get the same effect, but there was a choice…technically.

Good ol’ CT had an interesting rendition of this fairly early in the game, though. So you’re accused of kidnapping the princess and put on trial. Okay, so character witnesses are brought in to either speak on your behalf and tear your ass down. The more truthful (and nice) you were, the better you do in trial. This is interesting because even though it has little bearing on what happens next, it’s interesting that so many things were being checked on in the background without your knowledge of it.

So not only is that interesting, but then you get to BUST OUT OF FUCKING PRISON. AWWW YEAH, BITCHES. Granted, anymore it’s an obligatory scene. Somehow, someway, you need to get the fuck out before you’re executed. Well, being this is CT and therefore laced in golden sex, it gives you two ways to do this. Either way is pretty badass and determines whether you get Lucca sooner or later and even where you start in the dungeon!

Nevermind that the entire area is badass and the boss is A FUCKING ROBOT DRAGON!!1 Talk about fucking metal…Brutal Legend ain’t got nothing on this shit.

Psychonauts – Who Is The Milkman?

Psychonauts was a brilliant game from several angles: artistic, symbolic, humorous, fun, unpredictable, and in general visually impressive. Being that 90% of the game took place inside peoples’ minds, you’d think I’d be ready for the Milkman level. You’d be wrong. I can’t possibly think of a better representation of a paranoid schizophrenic.

Actually, the only thing I couldn’t quite put my finger on was the level design, in terms of it constantly winding and entangling in such a weird way. However, Schaffer answered that for me himself. Apparently in an interview a while back, Schaffer was quoted as saying he’d heard paranoid schizophrenics were entranced with this idea that not only was the world against them, but that the world revolved around them, and that if you noticed, the world in that level actually revolves around “The Milkman’s” house.

Well played, Schaffer. Well played. Clearly, this level is one of the most shining examples of brilliance in this title.

Final Fantasy 9 – All Events Leading Up To World Map

FF9 is one of the few FFs I’ve yet to beat, mostly because I run out of steam shortly into the second disc every single fucking time. Of course, that could be because slow parts come early…or it could be because the events that occur within the first couple of hours of gameplay set a pace that the rest of the game just plain can’t seem to keep up with.

There’s so much going on right toward the beginning it’s almost hard to follow, and yet, by the end of it, you have Zidane, Vivi, Steiner, and Garnet…a full party…already…with four equally awesome and well thought out characters. Well, and Blank, but he’s stoned already. It’s masterful, really. How so? Well…

Strangely, none of this feels forced or wrong either. Maybe it’s a testament to great character design…not sure. In any case, you get minigames, quandary, tension, kidnapping, intrigue, sword fighting, a play, comedy, AWESOME FMV work, a cursed forest, a couple of boss fights, rooftop jumping, lots of great pre-rendered backgrounds (a lot of which are animated), excellent music, airships, new and interesting innovations, and a whole lot more.

Seriously, I don’t think there was ever a demo for FF9, but there totally should’ve been…and it totally should’ve ended right after the cursed forest. Just THINK of how many motherfuckers would’ve scrambled to buy that game.

…Okay, okay…just ONE more scene, then. For now.

How often does a main character die in an RPG? No, not that shitty side character no one really gave much of a shit about until after he was gone (i.e. Tellah) or that one character that was so obviously put there only to kill off to make the real hero and us sad and shit (i.e. Aeris, though it was still goddamn effective)…I mean the main fucking character.

And not just in a “Oh he’s not really dead, he’s just in a coma or whatever” (i.e. Cloud in the lifestream), but in a “DAMN YO, THAT MOFO BE SUNNY SIDE UP.” The events leading up to Crono’s death are pretty amazing, but it seriously comes out of fucking nowhere. Even more amazing is the writing surrounding what the party does afterwards and leading up to getting him back (assuming you don’t jump the gun and fight Lavos right then).

Not only was it one of the more interesting and effective plot mechanics in the game, but it seemed like genuine empathy and compassion when your party gets him back…despite Crono still being 100% mute. Actually, it’s even more fun to think that he speaks like Kenny from South Park and no one bothers to translate for him.

Seriously, just watch it. This is all you need to know about Bayonetta and should determine perfectly whether you’d like it or not.

Sometimes what we remember about a game is something fun, sad, tense, scary…and sometimes, it’s something that’s normally boring and mundane that’s made fun. For example, I could easily claim that the Grandia series is kept fun and fresh because of the battle engine and that as a result, grinding is actually fun, which helps propel you forward in the game quickly, even if you end up HAVING to grind, because you’ll still be having fun doing it.

Next time, I think I’m going to hit some scary games and eventing in general. Stay tuned!