I agree that the title is a bit dorky, but I really can’t think of anything else to call it and honestly, “Gymcraft” wouldn’t really describe the idea in its entirety, so here goes. Two sub-genres I’ve been liking a LOT lately have been Metroidvanias and roguelikes. Of course, we already have an excellent combination of both worlds: Rogue Legacy.

But I’m also the kind of person that likes to fuse several genres together and even branch off of previously existing ideas, so I thought what would happen if you took Rogue Legacy, but set it up with more of a long-range goal (i.e. stages rather than continuously hitting the same castle over and over), made it into more of a side-scrolling brawler with platforming and puzzle mechanics, and…well, I’m getting ahead of myself.

First, let’s start with the Rogue Legacy comparison. In RL, you send in your brave knight to vanquish evil, get gold, acquire blueprints, and maybe defeat a boss or two before your untimely, but ultimately inevitable demise. Upon your death, all gold acquired can be used by your next of kin to beef up your tower, weaponry, etc. to make a far stronger and more capable knight for the next run.

You do this over and over until you beat it, but it can be beaten several times and there are a ludicrous amount of things to upgrade, so just focusing on that and getting achievements alone could easily net you a good 100 hours…and this is only focusing on ONE randomly generated castle. While this was a great game, it does get boring going through the same castle doing the same things, randomly generated or not.

Plus, you don’t really have the ability to improve your knight while you’re in the castle, only after you die and that’s it. I should also like to point out that one of my other favorite roguelikes is Dark Souls and you’ll see a nod to that momentarily. Three games have recently opened my mind to the idea of a Metroidvania with brawler mechanics: Muramasa, Dust, and Valdis Story.

In all three of these titles, you’re a swordsman of some sort that goes around beating the hell out of enemies in a Metroidvania-like world with Dust and Muramasa being more closely linked, but Valdis Story being just about the closest thing to Symphony of the Night I’ve played in a while, while the others feature wider terrain to have more large-scale battles in.

And while all three titles are great, there’s just something more satisfying to me about pummeling someone with fists rather than slicing them to pieces. Maybe it’s because there would be more to it as far as grapples, counters, acrobatics, and so on. Or maybe it’s just my way of thinking, I really don’t know.

But what does this all have to do with roguelikes? Well, what should be in your head so far is some sort of Metroidvania that somehow operates as more of a roguelike than a straightforward action RPG and it’s a brawler, so let’s tie this all together. You don’t level up. You do gain experience, money, and resources, but there’s no true leveling up…outside the checkpoints.

But…here’s where it becomes more like Rogue Legacy with a couple of interesting twists. Your character is a martial artist, not a swordsman, but he’s still a white belt who’s simply on a quest to save his girlfriend or whatever. Honestly, the plot itself is the furthest thing from my mind right now.

Money, resources, and experience can be expended at checkpoints to make, upgrade, and build up dojos. Each area features different types of resources available and some are very rare. As you progress through the game, you learn about newer and different types of equipment and upgrades you can put into dojos, meaning when you find a new checkpoint, you don’t have to build the foundation of the new dojo from level 1 equipment.

But it gets better. While there is no way to warp between checkpoints, there are good reasons for wanting to backtrack. Firstly, there are several optional boss fights that are merely there to test you at a higher level later. Second, as there are different resources at each stage, there will always be a reason to go back and forth.

Third, as your dojos expand, you won’t be the only member. No, regular civilians will come through, sign up for classes, offer to spar with you, and pay a manager that you can assign money that you can then collect at each dojo. Not only that, if you opt to not backtrack, you can still get a portion of the older dojos’ money from franchise upgrades that are available to purchase as you build more dojos and upgrade them each time you return to your newest checkpoint.

So what’s the catch? Where’s the roguelike part to this, besides the spacing of checkpoints? Well, it comes in the form of experience. So far, I have no plans to rob the player of resources or money if they get knocked out, but all experience will be gone. This is crucial because experience is not only used for building things, it’s also used for actually USING the dojos.

So let’s say you make a bench press workout area in your dojo and it’s still level 1, so you can only do so much there. Before you can train there, you must have a certain amount of experience first. Every time you train, you’re also using experience, but this time to just improve your character’s base stats, which in turn make you into a stronger and more apt character that will get farther in this run from this checkpoint.

Just working on my stamina!

And yes, each checkpoint automatically recovers you, just like in Dark Souls. So what’s to prevent you from just hanging around a checkpoint and getting massively overleveled while constantly building your dojo into a fortress? Nothing. Well, except high costs. First of all, every time you level something up in your character, the next enhancement, regardless of what it is, will cost more experience.

Yes, this is yet another nod to Dark Souls. It actually ends up becoming easier to develop dojos rather than level up, but here’s the thing about that, you don’t want a bunch of weak ass dojos. No, you want the most up to date equipment in them because even if you can’t use them, aspiring gym members can and will pay more money for dojos with better equipment.

So what about the actual gameplay? Valdis Story most closely matches how I want the combat to work, but with more flexibility in terms of moves…and with more focus required. When you start the game, you’ll find that you have three bars: health, chi, and stamina. No, this isn’t Jade Empire, shut up. 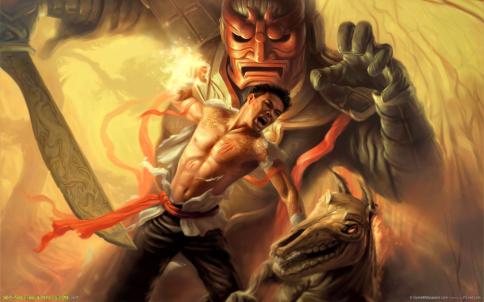 I guess I see how you could confuse the two, though

Health is pretty straightforward, so let’s move on to chi and stamina. Stamina is expended with each move. Now no, I don’t mean jumping, but sprinting for long periods of time and extended combos, yeah, that burns up stamina quickly. If your stamina runs out, you can’t do anything more than walk and jump sluggishly until a counter runs out.

While the counter is active, you’re also more susceptible to attacks, so it’s always important to keep an eye on your stamina. When the counter finally does run out, all of your stamina returns, however, a wiser option is to let the stamina recover naturally, which occurs slower or quicker depending on what you’ve trained in the dojos.

Chi is used for a wide variety of martial arts magics including healing and different types of mystical attacks. Initially I was thinking of having this be something that didn’t recover until you hit a checkpoint, but I’m thinking I might have it recover outside combat because there are a wide variety of platforming puzzle elements I could link to this.

I know it’s a lot to take in, but ultimately I could see this being a very, very fun title. Even if it was just a Metroidvania with a lot of heart, I could see people getting behind it, but if everything I’ve already mentioned was satisfied, this could be gold. Thanks for the read!